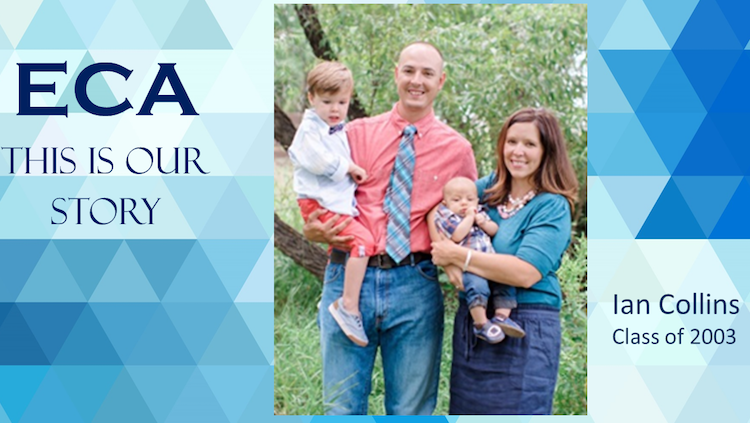 I often reflect on my time at Evangelical Christian Academy, the friends I made, the things I learned, and my heart is filled with immense gratitude. There are countless reasons that contribute to my appreciation – lifelong friendships, superb academics, and amazing faculty. However, I’m most thankful for the Christ-centered, gospel-focused environment, and that every facet of an ECA education directs one back to the saving grace of Jesus Christ. It is something that I certainly didn’t value as highly while I attended, and it wasn’t until years later that I realized that this was truly the most important part of my education and experience.

I began attending ECA in 1996, entering my 6th grade year. It was a difficult transition for me, to say the least, and coming from a public school education I was not immediately ready for the academic rigors. It took a year or two, and the grace and patience of my teachers, for me to fully acclimate and embrace everything that ECA had to offer. Later, high school fostered in me a love of learning and curiosity that still exists today. I can confidently say that with the help of Mr. Holtcamp, Mrs. Vollbracht, Mrs. Hilger, and countless other incredible teachers, I was able to reach my fullest academic potential, and also a deep and abiding love of God. Looking back now at this experience, I can tell it was God setting my foundation in Him, a foundation I would need for the rest of my life.

During my senior year, I applied to the U.S. Air Force Academy with the hopes of becoming an Air Force officer. Shortly after graduating in 2003, I received the news that I had not been accepted, but undaunted, I enrolled at UCCS and participated in AFROTC at CU Boulder. I applied to the Academy once more, and even received a congressional nomination from then Senator Ben “Nighthorse” Campbell. Much to my chagrin, however, I was yet again denied an appointment. The news we devastating, and instead of trusting God’s answer, I immediately left college feeling hopeless and began working on the south-side of Colorado Springs. Those were dark days for me, and resulted in a spiritual dry season, although unbeknownst to me at the time, God was still actively working in my life.

In 2005, after the gracious mentorship of friends and family, I decided to fulfill my lifelong dream of being an Airman. I enlisted in the Air Force and shipped off to basic military training in August 2005, and was subsequently stationed in Oklahoma City. There, God wooed me to Him yet again, and I joined a small PCA congregation on the north-side of the city. He began to show me all the mighty things that He had done, was doing, and was going to do in my life. After two years in Oklahoma City, I was reassigned to Joint Base Elmendorf-Richardson, Alaska. It was in Alaska, on a blind date, that God blessed me in meeting my future wife, Stephanie. She is an absolutely gracious gift of God, and the best companion and wife a man could ask for. We married in 2010, and in 2012 we welcomed our first son, Declan, into this world. In 2013 we were reassigned to none other than the U.S. Air Force Academy, where I currently work as the senior enlisted leader in a squadron of 105 cadets. I’m responsible for the discipline, standardization, motivation, teaching, training, and counseling of my cadets, helping them to become world-class Air Force officers. Since being stationed back here in Colorado Springs, we’ve welcomed our second son, Clint, and have found an incredible community of believers with whom we can grow. Moreover, Declan is attending ECA Pre-K under the tutelage of Mrs. Jagers, and is thriving in the Christ- centered environment. We’ll be departing here next year, as I am bound for Officer Training School to become an Aircraft Maintenance Officer.

ECA was a critical component in shaping my character, personality, and work ethic. Thanks to the foundational principles I learned at ECA, I’ve been the top graduate in three professional military education courses, attended by hundreds of Airmen and Soldiers. Furthermore, I’ll be graduating college this December with a Bachelor’s Degree, all while maintaining a 4.0 GPA. The Lord has been exceedingly good to me and my family, even in times when we could not perceive His presence. Ultimately, I can now look back over my life and see that all the difficult moments were for His glory and His purpose. I’m grateful to God every day for the rock upon which He set me in Christ, by way of Evangelical Christian Academy.